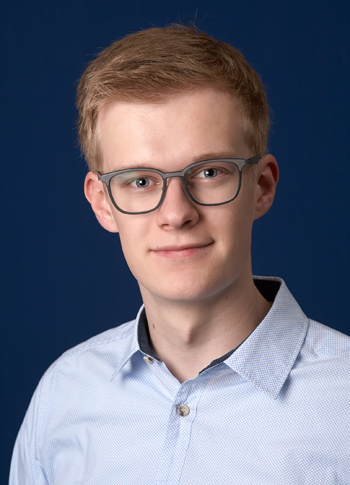 Jannis Finke obtained a BSc and an MSc in Mechanical Engineering from TU Braunschweig. His studies were particularly focused on mathematical modelling and numerical solution methods. Within the scope of his BSc thesis Jannis developed an efficient numerical framework for investigating the flow behaviour and pressure distribution of non-Newtonian fluids in small gaps. This is particularly relevant to bonding processes involving highly viscous adhesives. During his subsequent master's studies and in his MSc thesis he worked on metal combustion and developed a kinetic framework for predicting the size distribution of the oxide smoke that precipitates in the vicinity of a burning aluminum particle. Here, the dispersed smoke particles were described with the aid of a population balance approach, synthesizing oxide particle nucleation, growth and coagulation. For the numerical solution, Jannis advanced a grid-adaptive solution scheme. His studies were supported by the Lower Saxony Scholarship and Germany's national scholarship program (Deutschlandstipendium).

In 2021, Jannis joined the Emmy Noether Group for Dispersed Multiphase Flows at the Chair of Mechanical Process Engineering as a research assistant. His work is focused on the development and implementation of numerical methods for solving the population balance equation on irregularly shaped domains as well as the development and adaption of the in-house CFD-code. His work aims at the prediction of oxide particle size distributions in laminar flows and the evaluation of practical techniques for separating oxide particles from exhaust fumes of metal dust flames.

Metal fuels are powders of micron-sized particles made, for example, from aluminum, lithium or iron and have recently been explored as a carbon-free alternative to conventional fossil hydrocarbon-based fuels. One practical advantage of metal fuels is their potential for recycling. During the combustion, metal oxides form and precipitate, appearing as smoke. Potentially, these particles may be separated from the carrier gas with the aid of appropriate extraction techniques. Within the scope of the yet conceptual metal fuel cycle (see schematic illustration), the separated oxide particles are subsequently reduced using green energy sources such as wind, solar or geothermal energy. In this way, the original metal is recovered and may be reintroduced into the metal fuel cycle for consumption, acting like a rechargeable high-temperature battery. Compared to conventional batteries, metal fuels possess a much higher energy density. Moreover, as metal fuels are burned at high temperatures, the chemically stored energy is released at power densities that are thought to be comparable to those of existing hydrocarbon combustion engines. In addition, since metal fuels are solid and inert at ambient conditions, there are no special safety requirements for storage or transport.

On the consumer side, the feasibility and economic viability of the metal fuel cycle is mainly determined by the amenability of the formed oxide particles to efficient extraction and separation. Here, the particle size is a decisive factor. Large particles, for example, can be separated very efficiently using cyclones, whereas small particles may require energetically costly HEPA-filters. In this regard, our objective is to predict the oxide particle size distribution and estimate the average particle size occurring for given operating conditions. This provides an avenue towards the systematic assessment of apt separation techniques and the identification of conditions conducive to efficient extraction.

In order to model the particle formation/interaction processes, we harness a population balance approach adapted to oxide smoke particles. The population balance equation (PBE) is a partial differential equation that governs the temporal and spatial transport of the particle property distribution. In this project, the particle size is the property of interest. A major challenge is the development of a framework for the kinetic rates at which the dispersed oxide particles exchange both mass and energy with the carrier gas. Our work aims at the construction of a detailed kinetic framework including nucleation, growth/shrinkage, coagulation, dissociation, thermophoresis, mass and heat transfer as well as thermal radiation based on established physical principles. Besides the physical modelling, the project targets the development of discretization methods for economically solving the PBE based on adaptive grids.

In a first step, the oxide precipitation near a single burning aluminum particle in a laminar flow (see figure below) is investigated with an objective to validate the spatial smoke and temperature distribution along with the global particle burning time. In this regard, we couple heterogeneous surface and gas phase reactions with the PBE model and a flow solver, including the implementation of a mechanism describing the deposition of oxide smoke on the burning surface and the formation of an oxide cap. In a second step, we intend to investigate entire particle clouds of several metal particles with the aid of immersed boundary methods in order to accurately resolve the changing particle-dispersion interface. The information obtained from this examination will be instrumental in transitioning to an Eulerian-Eulerian description of metal dust flames.